The Lal Quila, also known as the Blessed Fort is one of the finest architectural Marvels of Mughal periods. Built between 1638 and 1648 by Shah Jahan is the seventh Muslim city within the boundaries of Delhi. The fort has 2 gates which open into the city of Delhi; first one is the Lahore, which faces the city of Lahore in Pakistan. The fort was built using the red sandstone which gives it the name “Red Fort”. The walls which are about 2kms in length vary in height from 18 meters to 33 meters.

Like any other fort the Red Fort is also divided into several parts, each one of them has their individual functions and importance. For example, ‘Diwan-i-am’ i.e. the public audience was where the emperor held meetings with the public and his private meetings were conducted in the ‘Diwan-i-khas’. “Rang Mahal” or “The Palace of Colors” was meant to be private quarters for the emperor’s wives and mistresses. The hall is decorated with beautiful mirrors and paintings; the famous “Mumtaz Mahal” has now been converted into a museum. The Turkish styled baths which are known as the ‘Hamams’ and the private working area of Shah Jahan was called the “Shah Burj”. The royal chambers or the ‘Khas Mahal’ is another tourist attraction. A courtyard specially designed for the musicians adds to the grandeur of the fort. Later, Aurangzeb had extended the Fort with the Pearl Mosque or the ‘Moti Masjid’

The fort has witnessed the extravagant lifestyle of the royals during this period, many a people have been rewarded with riches of lifetime by  the Mughal, but as we all know nothing lasts forever no matter how powerful and rich you are. The Mughal Empire eventually declined and this falling out resulted in the falling of the fort with the invasion of Nadir Shah and eventually the British Government. The Fort what we see today also houses the settlements constructed by the British within its complex.

“The Blessed Fort” Walk of Delhi Walks takes you through the whole timeline of the Red Fort along with tones of stories and legends associated with them. Ms Nidhi Bansal one of many such walks taking you into an era of glory and power. Explore the rich heritage of Indian History with Delhi Walks. 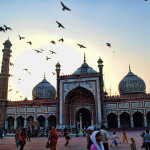 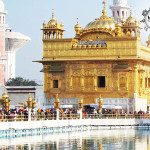 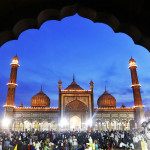