UNESCO established 18 April as the International Day for Monuments and Sites in 1983. It aims to raise public awareness about the diversity and vulnerability of the world’s built monuments and heritage sites and the efforts required to protect and conserve them. To celebrate World Heritage Day, ‘Delhi Walks’ / “India City Walks” in association with Delhi Tourism organize a “Shahjahanabad Heritage Walk” and a “Rickshaw Tour” on 17th April 2016 to promote heritage and sensitise residents and visitors about the monuments that are an integral part of the capital city.

Since the heritage walk and the rickshaw tour both began at Jama Masjid, ‘Delhi Walks’ / “India City Walks” team ensured that the visitors connected with the imperial vision behind the creation of Shahjahanabad, which was built by Mughal Emperor Shah Jahan as the seventh city of Delhi. He planned it in an impeccably meticulous fashion with two focal architectural landmarks, the first literally being his seat of power or residence, the Red Fort and the other being Jama Masjid, which happens to be the largest mosque in the country. Thereafter,  “Delhi Walks” / “India City Walks” made the visitors step away/glide away from Shah Jahan’s opulent creation, guiding them right into the heart of Old Delhi’s bustling lanes, which essentially comprise of historical neighbourhoods that flank the landmarks commissioned by the Mughal Monarch. 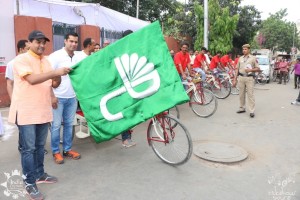 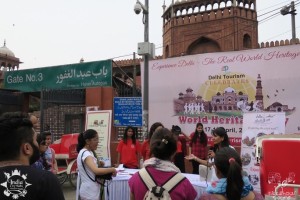 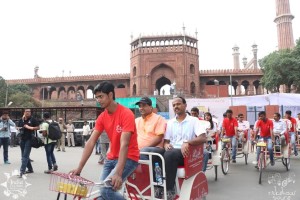 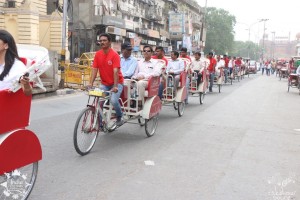 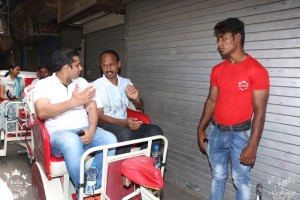 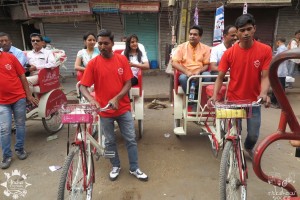 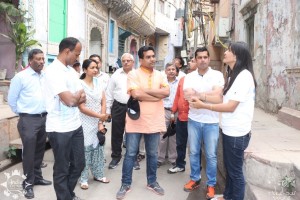 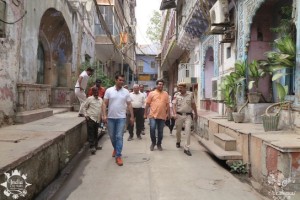 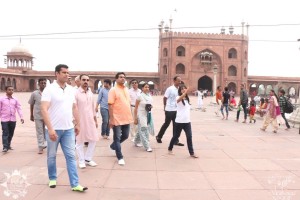 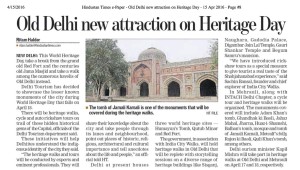 These neighbourhoods are hidden treasure troves of built heritage and the visitors were in for a visual treat, as “Delhi Walks” / “India City Walks” took them on a journey through a range of chronologically diverse heritage buildings that proudly stand on the landscape of Old Delhi such as Sisganj, Naughara, Gadodia Palace, Digambar Jain Lal Temple, Gauri Shankar Temple, Begum Samru’s mansion etc. “Delhi Walks” / “India City Walks” also conducted storytelling sessions at these monuments that gave the audience a taste of the multicultural built heritage of Old Delhi, where a discussion was held on syncretic architectural patterns and motifs and lessons were imparted on the architectural journey of Delhi and its evolution through the ages. ‘Delhi Walks’ / “India City Walks” also plan to conduct workshops and conferences highlighting the importance of conserving the built heritage of Delhi as well as cities across India.

With tourism products like walking tours and ‘Rickshaw Tours’, ‘India City Walks’ / ‘Delhi Walks’ aims to promote the built heritage of Delhi in an eco-friendly manner and inculcate a sense of pride and appreciation for cultural heritage among localities, so that they can then look at the monuments and heritage structures with new-found respect.