Join us and traverse the precincts of a QUTB COMPLEX! 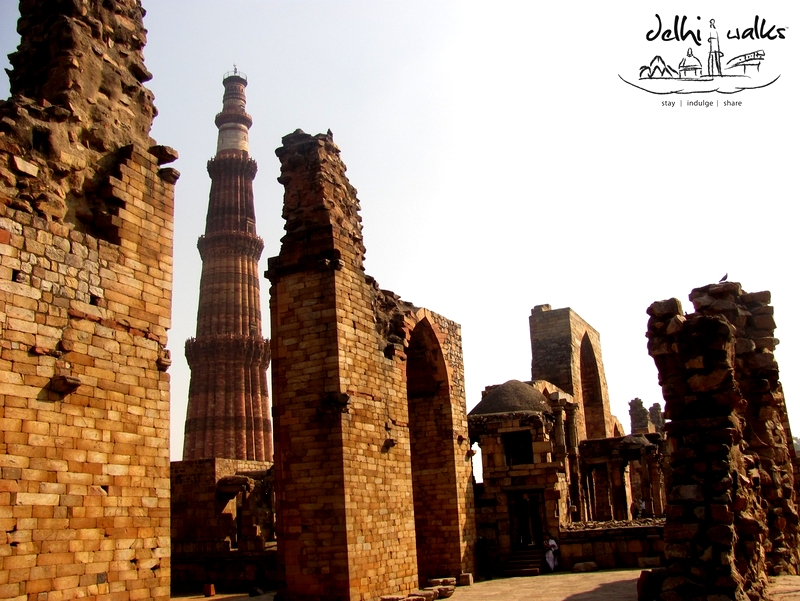 Must do Walking Tour when in Delhi!

Once part of Lal Kot, the first urban complex in Delhi built by the Tomar Rajputs, today the Qutb Complex is a UNESCO World Heritage Site and houses some of the major structures constructed by the Turkish rulers of Delhi, following the victory of Mahmud of Ghazni over Prithviraj Chauhan.

Qutb Minar was started by Qutbuddin Aibak, who only saw the construction of the first storey during his lifetime. The spectacular Minar that stands in front of you today is the result of additions made by his successor Iltutmish and later by Firoz Shah Tughlaq. The first storey depicts a rich amalgamation of Indian and Islamic aesthetics with intricate floral patterns, undulating outlines, and even bells at some places blending beautifully with verses of the Quran. Following Aibak’s death, his successor, Iltutmish (AD 1210–35) erected three more storeys over the first floor of this minaret. Subsequently, the fifth and the last storey was added by Firoz Shah Tughlaq in AD 1368 dressed in white marble and sandstone, lending the Minar a distinctive look and demonstrating a tale of architectural development from the age of the Turkish sultans to the Tughlaq era.

Built at the end of the twelfth century, Jami Masjid, later called the Quwwat-ul-Islam (‘Might of Islam’) Mosque is the first mosque that was built in Delhi. Founded by Qutbuddin Aibak, the mosque was extended after Aibak’s death by Iltutmish in the year 1230 AD. Extension of the western screen wall from either side resulted in a space almost double the size of the original mosque. These extensions reveal an apparent maturity in both design and detailing. Further additions by Alauddin Khilji (AD 1296–1316) led to a substantial expansion of the mosque and other distinct structures within the entire complex. The colonnades possibly served as temporary shelters and the double storey enclosures along the corners could have been built exclusively for the royalty.

The Alai Darwaza was built as the main gateway to the ambitious extension of the Quwwat-ul-Islam Mosque undertaken by Alauddin Khalji in the early fourteenth century. Its four gateways, forming a square, are covered by a wide bulging dome, resting on horse-shoe shaped arches. Dressed in red sandstone and marble, the entire gateway except the dome is carved with intricate geometrical patterns and inscriptions in naskh characters; the arches are decorated with a lotus bud. Its elegant proportions and excellent decorations make Alai Darwaza one of the fi nest examples of the early Sultanate style of architecture in India.

At the centre of the Quwwat-ul-Islam Mosque, stands the architectural marvel known as the Iron Pillar. Its austerity has never ceased to amaze archeologists, metallurgists, academicians, and tourists, for the way it has resisted corrosion through the last 1,600 years. The pillar may originally have been located elsewhere, as the inscription on it says that it was placed on a hill called Vishnupada and may have been shifted to this location during Tomar times. Believed to be a tribute to Lord Vishnu, the patron deity of the Gupta kings, the pillar is said to have resisted corrosion because of its pure composition of iron, a high presence of phosphorous, and the method of casting.

Join us and traverse the precincts of a heritage complex that takes you through the entire architectural timeline of the Sultanate period in Delhi. India City Walks is a National Award winning brand that was conceptualized with the simple idea of exploring cities across India in an earthy manner. Our unique itineraries enable travelers to connect with the plural, vibrant soul of the city. Our passionate team of city explorers narrate intriguing tales that are interspersed with anecdotes, facts, myths and legends, all of which are bound to intrigue you. We aim to enrich your city experience and give it a holistic touch. Even in the city’s most popular locations, we offer unparalleled and memorable local experiences.